Catch up with the results from last week's hockey matches. 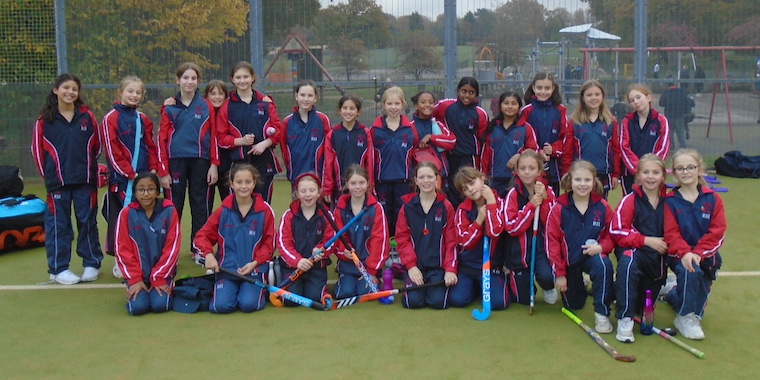 U10/11A vs The Mead: We won the first centre push back in a half of 20 minutes. The first goal went into the left corner and was scored by Martha. The second was again scored by Martha, this time with the help of Ella. Martha did a cracking shot into the D and Ella passed it back to Martha who shot it into the right corner. By the second half, we were 2-0 up but then sadly let in two goals to finish at 2-2. The player of the match was Martha. Ella and Nicole did some amazing defending. Well done to everyone who participated.  Martha

U10/11B vs The Mead: Our team played very well and two great goals were scored by Megan and Mevna, but unfortunately the end result was 5-2 to Mead. Emilia played brilliantly as goalkeeper and saved several goals. Mevna was good at dribbling the ball up the pitch and avoiding defenders, Constance, Annabel and Emily worked well as a team keeping the ball out of the D. Eva and Megan were good at finding space to be passed to and sending powerful passes.  Annabel B

U10/11C vs The Mead: What a match we had! Even though we didn’t win, we are still very proud of ourselves. At first, some of us kept going to the wrong goal and when they swapped, we all did it! It started a bit hurley-burley, but when we remembered the tactics Mrs Curling and Mrs Cobb had taught us, we calmed down. Kayla says goalkeeping was a lot of fun and stopped what would have been an amazing goal for The Mead. Amber was the player of the match because she did some epic tackling. Dakota scored our one and only goal which rolled right past the defender’s foot! It was such fun and the final score was 3-1. Niah

U9 Triangular v Rose Hill and Sevenoaks Prep: We split into two teams. Team 1 was Georgina, Anaya, Isla and Isabella was the captain. Team 2 was Annabella, Clara, Grace and Mia was the captain. We played four matches in total on the Hollybush hockey pitches. Team 1 won their first match 7-0 with Georgina scoring six goals and Isla scoring one goal. In the second match we drew 0-0 but played really well. We won the third match but lost match the fourth. Team 2 won their first two matches 3-1, their third match 2-0 and lost their final match 3-1. We had a lot of fun and worked hard on our tackling and space skills. We had a lovely match tea.  Bella