Catch up with the news from last week's hockey matches. 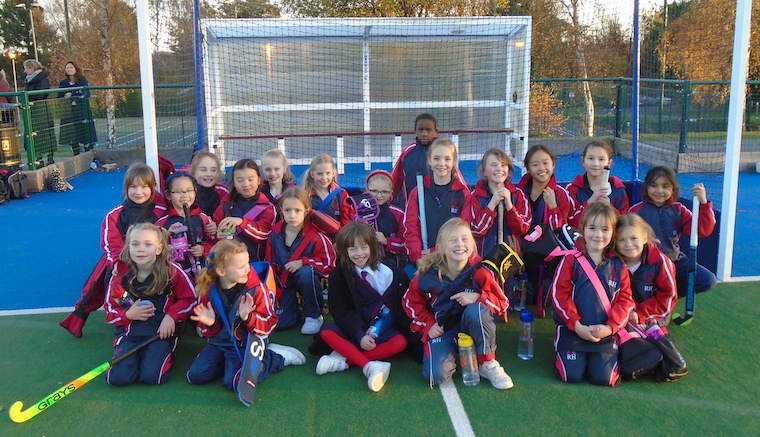 U10A v Rosehill: We won the first pushback and shortly afterwards, Eva scored an amazing goal, quickly followed by a second. By the second half we were 2-0 up. Next, Madison scored a great goal from just inside the D making it 3-0, followed quickly by a goal from Mevna. It was an amazing game, and we almost kept a clean sheet but let one goal in towards the end of the second half. The final score was 4-1 to us. Well done to everyone who played - it was a great team effort. Mevna was voted girl of the game for her outstanding performance. Lexi

U10B v Rosehill: The B team played really well and everyone tried really hard. We lost 5-0, but our team made some great stops and passes. Maia did some really strong passes throughout the pitch and Dakota and Scarlett did some awesome tackling. There are areas we need to work on like spacing and using the width, as well as not panicking before making a pass. Overall it was a good match, a great experience and everyone did their best. I was player of the match. Connie

U8s and U9s v Kent College: We played in lots of mini matches of 4v4 and 3v3. It was very cold, but we did lots of running so all warmed up. There were some good wins, with each team scoring lots of goals, and there were some close losses too, and even some draws. Each team played at least three matches. It was really fun and everyone had a good time. After the matches we went inside for match tea which was burgers. It was a great afternoon of hockey and a good finish to our last matches. Grace, Clara, Hermione and Jessica
This was our last game of the hockey season and we were excited to be playing Kent College. We were divided into teams of four for a mini tournament. Everyone played really well, especially Bea in defence. We won two games and lost one. The overall score was 6-1 to Russell House - well done to us! Georgie
Our Form 5 hockey team travelled to Kent College for a series of mini-matches. We had a very small team of three - Isabella, Clara and Grace - but this gave us a chance to really practise our passing skills. We won the first game 8-0. In the second game, Kent College had four players, so we had to really work hard at defending and all made some great saves. Unfortunately we lost this game 4-0. In the third game, Kent College continued with four players but this time we managed to score and the final result was 2-1 to Kent College. Isabella

U11s v Rosehill: Form 7 girls played three outstanding matches against Rose Hill. Instead of one big match, we played three mini matches. There was some incredible attacking by Martha and Varsha and a lot of teamwork between Annabel and Dorothy. Our goalie, Emilia, made some amazing saves and ensured her defenders were in the right place. Sadly two of our players were unavailable for this match, so we played our best with our reduced numbers. A massive shoutout to Megan who defended wonderfully and also helped a bit further up the pitch. Our players of the match were Martha, Varsha and Annabel. We all had a great time and - to end it nicely - we all enjoyed a well deserved match tea. Scarlett