Reports from the final hockey fixtures of the term. 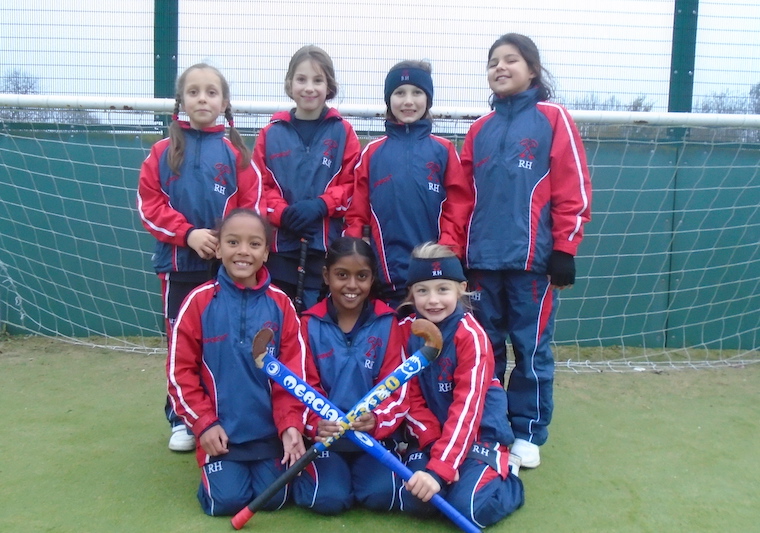 On Wednesday our U10/11A&B hockey teams played Sevenoaks Prep at Hollybush Lane. It was a bitterly cold day, but all our girls played well.

U10/11A v Sevenoaks Prep: We drew 1-1 and we played very well. We had many opportunities on goal and Lucy scored. We ran out of time so we could not score another goal. Anna was our player of the match. Well done girls.

U10/11B v Sevenoaks Prep: We played very well even though we lost 3-0. Isabella, playing in defence, saved some fantastic goals from being scored by the opposition. Alice saved some good goals too. Ellie was player of the match and Maisy made some excellent passes. Matilda was midfield and Alyssa was centre forward. Overall, I think we did amazingly.

On Thursday, all our U8 and U9 girls played away against Hilden Oaks. It was our final hockey fixture of the season and the girls were playing as three mixed teams for the first time. All the girls played brilliantly and we definitely finished the season on a high.

U8/9A v Hilden Oaks: We had a fantastic match. All the team played really well and it was our best score yet! The final score was 13-0, with great goals from Martha, Dorothy, Scarlett, Madison, Charlotte, Ella  and Lexi. Player of the match was Dorothy, but all round a great team effort and result.

U8/9B v Hilden Oaks: It was a great match, which we won 4-1. Eva was good in defence and Connie was very good at tackling. Nicole was excellent at scoring goals (she scored two). Vasha was also excellent and Megan was great at scoring goals too. Everyone had a great time. Well done to Mevna, who was Player of the Match and congratulations on a brilliant win.

U8/9C  v Hilden Oaks: Hilden Oaks played very well and it was a tough game. Niah played very well, as did Kayla and Amber in defence. Both teams played well and scored 1 goal each, drawing the first half. In the second half, Russell House and Hilden Oaks scored two more goals and we finished with a 3-3 draw. Our goals were scored by Dakota, Maia and Mevna. Well done to everyone!