Reports and pictures from some terrific matches against Spring Grove. 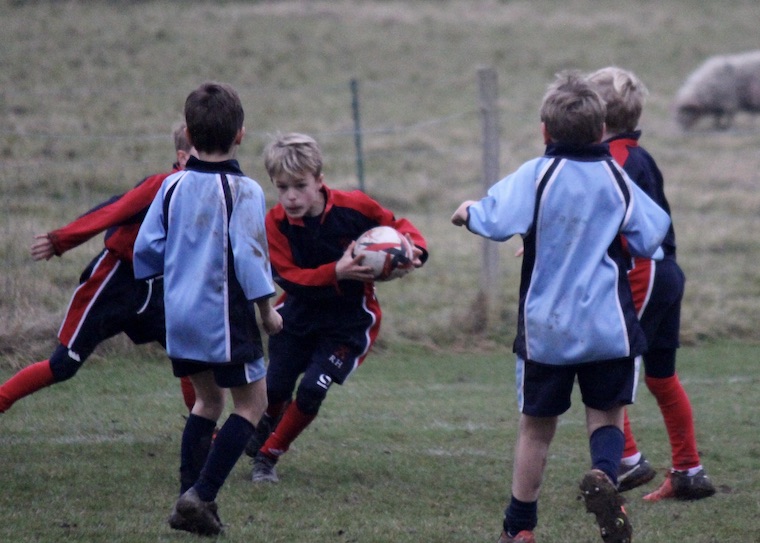 U10/11A v Spring Grove: At half-time Spring Grove led by only 1 try courtesy of their star rugby player. Russell House's defence was immense with solid tackles from Teddy, Reuben, Tristyn and Tommy. The majority of the half was spent on our try line so to only concede one try was incredible. The opposition were proving very difficult at the breakdown due to their considerable size advantage. After two further tries from our hosts, Russell House struck back with a great try from Teddy. Towards the end of the game, the speed of the Russell House boys was beginning to take its toll on Spring Grove and we had penalty after penalty on their try line as the infringements piled up. Despite all that pressure, and a disallowed try, the score ended up 5-1 to Spring Grove.

U10/11B v Spring Grove: This was a game of two halves with the first half score of 3-1 to Spring Grove. In the second half, and despite a try from the outstanding Daniel, Spring Grove pulled away with a number of tries. Christian pulled one try back but it wasn't enough and the B team lost 9-3. Daniel's performance was of a very high standard as were Ben's, Bjorn's and Christian's.

U9 v Spring Grove: This was another terrific match, a real ding-dong affair. Tries were swapped between the two sides on a regular basis so that at half time the scores were tied at 4 tries apiece. All of the Russell House tries were courtesy of the outstanding Harry. After half time, the opposition began to tire and Russell House's other players began to make more of a mark on the game with tries from Henry and Xavier and two from Oliver, including a solo run of 35 metres! The end result was a well-deserved 9-7 win.

U8 v Spring Grove: Facing larger and quicker opposition was going to be difficult in this match and the first half was a little one-sided with Russell House going to the break 5-1 down. After encouragement from Mr Falconer, the boys came out firing and nearly 'won the half' before losing the game 7-3. The tries were from William, Oliver and Dexter.